Distribution is underway for Undaunted, Chasing History at the Boston Marathon, a documentary film featuring Juli Windsor, the first dwarf to finish the Boston Marathon. In 2013, Juli, like thousands of other runners was stopped at mile 25.7 as bombs were exploding at the finish line. In 2014, she came back to make history! Broadcast dates will be announced soon. Trailer can be seen here:

The Beatrice Mtetwa School for Girls is opening in Uganda on Jan.26th! Focusing on a curriculum about human rights and civic responsibility, the school is named after the inspiring human rights lawyer from Zimbabwe, Beatrice Mtetwa. The film that I produced in 2013 about her courageous work continues to screen and broadcast around the world. May these students be as inspired by Beatrice as I was filming with her.

In this photo of Beatrice, she is walking in front of her elementary school in Manzini, Swaziland, where a teacher told her that she “had potential” and that she could be whatever she wanted to be.

Determined to leave the rural “village life” behind where she was raised, Beatrice received a scholarship to the University of Edinburgh then went on to law school in Botswana.

I am pleased to be featured in Nieman Reports, the quarterly publication of the Nieman Foundation for Journalism at Harvard. I write about making the film about Beatrice Mtetwa, the inspiring and brave human rights lawyer in Zimbabwe. The documentary took root at Lippman House, home of the Nieman Foundation, with Hopewell Chin’Ono, Nieman Fellow, Class of 2010, as co-producer, and Andrew Meldrum, Class of 2008, who was defended by Beatrice and appears in the film. I was a Nieman Fellow in the Class of 1994.

A first look at our film about Juli Windsor, the first dwarf to run the Boston Marathon, was at the Nieman Foundation for Journalism this week. Lots of good feedback and thoughtful suggestions as we kick in to the final stage of editing. click here to view the trailer

I was honored to be with Beatrice Mtetwa, the bravest lawyer in Zimbabwe, who received the Ivan Allen Prize for Social Courage at Georgia Tech. A true believer in change, Beatrice inspires others around the world to stand up, bear witness, and do what needs to be done to make a difference. As she told me in the film I produced on her work, “You know this has to be done. Somebody’s got to do it. Why shouldn’t it be you?”

Click here to watch the trailer for Beatrice Mtetwa and the Rule of Law which is being screened and broadcast around the world.

Click here to view LOVE RADIO, a remarkable “transmedia” web documentary comprised of “two layers: an upper layer – On Air – and a lower layer – Off Air. On Air retells the radio soap’s fictional story of hate, violence, love and reconciliation between two neighbouring villages. At various moments throughout the documentary, viewers are introduced to the lower layer: Off Air. This layer provides a glimpse behind the scenes of the soap. Actors and audience have their say, thereby painting a picture of contemporary Rwanda.”

Over the space of 100 days from April to June 2014 – the duration of the genocide exactly 20 years ago – a new episode was added every other week.

Click here to watch powerful video about Thulani Maseko, a Swazi human rights lawyer, and Bheki Makhubu, a prominent journalist and the editor of the Nation magazine. They were arrested, detained, convicted of contempt of court, and sentenced to two years in prison, for exercising their fundamental human rights to freedom of expression in writing and publishing articles criticizing the judiciary in Swaziland. It was great to work with colleague, Andy Laub, creating the video and Jeff Smith from the Robert F. Kennedy Center and his partners who initiated the #SwaziJustice campaign to free Thulani and Bheki, who have an appeal coming up Nov. 3rd.

My film about Beatrice Mtetwa is having its worldwide television premiere on KCETLink, the national independent public media organization.  The film chronicles Beatrice’s work as a courageous human rights attorney fighting against social and political inequalities in Zimbabwe. The film will air on Link TV (DirecTV 375 and DISH Network 9410) on Wednesday, Oct. 15 at 9 p.m. PT/ET and on KCET (Southern California) on Wednesday, Nov. 5 at 9 p.m. PT. The film will also be available online starting Oct. 15 at linktv.org/mtetwa.

On Nov. 11, I will be in Atlanta with Beatrice for a screening moderated by Jacqueline J. Royster, Dean of the Georgia Tech Ivan Allen College of Liberal Arts, starting at 8 p.m. ET. KCETLink will also be accepting questions and streaming the event live via it’s website at linktv.org/mtetwa. Alternatively, viewers can submit questions for Beatrice via Twitter and Facebook using the hashtag #allenprize. If you miss the television broadcast, you can purchase the DVD at www.ruleoflawfilmproject.com 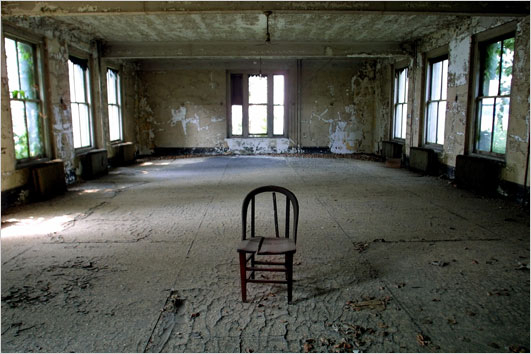 A scene from the film ‘Forgotten Ellis Island’

JR, a French photographer, was as captivated as I was by the empty hospital buildings located on Ellis Island‘s south side.

Today, a new exhibit has been installed in some of the hauntingly beautiful rooms and hallways of the hospital. Featuring several archival photographs of immigrant patients and their families, the hospital breathes life once again. Bringing faces from the past into the present. Click here or on the photo to read the article

in the NY TIMES for more information about tickets to view the buildings and exhibit. Expect to be moved by it…

NPR’s Margot Adler died today. I never knew her personally. But I loved her reports because it seemed like she always asked the questions I was thinking. She seemed intensely curious about many things and told stories in a way that made the people she was talking about present in the room. Tough to do in radio reporting! The saddest part about her death is the 23 year old son she left behind.

I'm Lorie Conway, a Peabody Award winning, independent filmmaker based in Boston, MA. My passion is producing documentary films and videos about stories that matter.

RT @RepJayapal: Not. An. Accident. Why was this cop wanting to pull a taser on a 20-year old kid for expired tags in the first place? Abs…
Reply Retweet Favorite